Failing Your Way to Success.
Self-esteem comes from having the courage to risk failure.
Most folks will never live the life they really desire, because they are unwilling to do what it takes. For some people, success comes after many failures, many mistakes, and many rejections.  And yet, those who make it to the finish line are willing to risk not doing something perfectly—the first time. 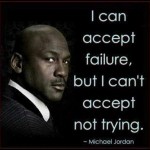 What often happens with successful people, who have overcome challenges, is that they’ve learned that failure is nothing more than an opportunity to get to the next level. They’ve learned that if they do fail, or make a big mistake, or get rejected in some way, what they need to do is get up, dust themselves off, and start all over again. A simple, but not so easy formula for success.
I know all too well what it’s like to fail—many, many, many times, before succeeding. One of my best examples is when I failed both the New York and California bar exams—over, and over, and over again. In each case, I thought my world had ended. And while I was ready to give up—I didn’t. Instead with all the humility I could muster, I picked myself up, dusted myself off, and took the exam again, and again, and again, and again. I passed the New York bar on the 3rd try. As for California, well, I stopped counting how many times I failed after 6. A debilitating experience and one I’ll never forget. Now 22 years later, I am a lawyer in both states and doing quite well, thank you.
Ironically, that most painful experience in my life is one of the reasons I get invited to do motivational talks so often. Mine is not a story of easy success. No, it is a story of faith, resilience, courage, and patience.
Self-esteem comes from having the courage to risk failure—one baby step at a time.
Have you ever failed your way to success?  Join my conversation on my Facebook Fan Page, Twitter, or in one of my LinkedIn Groups.