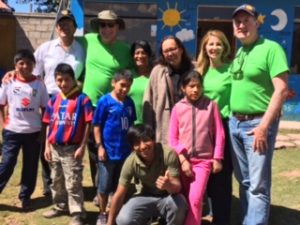 Not sure why it’s taken me so long to publish this post, but it has.  Some might call it lazy, but lazy I’m not.  Some might say, I was too busy to focus on it. But if the truth be known, I was not too busy; I was just a procrastinator. In any event, here we go!
A few months ago, I was watching a segment of Sunday 60 Minutes called, the Children’s Village. I was touched by the humanity of India Howell and her business partner, Peter Leon Massy.  Their love of and desire to help children was heart-touching. It also reminded me of my recent adventure in Peru.

Machu Picchu was never on my bucket list.  No, I was not jumping for joy at the opportunity to travel 12,000 feet above sea level—in hiking boots.  I mean the truth is, I’m a high heel kind of girl—5 inches high, I might add.  Yet, much to my surprise, when given the chance to journey to Peru in July, I was willing and able to show up.  That’s how life works. When we are open to the endless possibilities presented to us, we get so much more than we planned. At least that’s my experience.

Because I had never ventured to such a high altitude, I was a bit concerned. So, I prepared myself for the journey. I spoke with several friends who had trekked up the mountain, and had a conversation with my doctor about appropriate actions to take.  But the interesting and most telling thing is that I took the suggestions offered to me. What a novel concept. That single action allowed me to avoid the sickness often visited upon high altitude hikers.

First Class Travel, not so shabby!

The actual flight to Peru was delightful. Because I travel a lot, I’m an elite flyer on American Airlines and a lifetime member of the Admirals Club. Being an Executive Platinum has its perks, and there is something to be said for first class accommodations.  It makes a difference. So even though I arrived into Cusco at 5am Sunday morning, I felt rested.

But the real fun began on Monday, which was our humanitarian day.  We left Cusco at 6am headed for the Azul Wasi Orphanage.  But let me step back. On the way to the orphanage, we stopped by a bread house.  Peru is a relatively poor country, so folks make money in whatever way they can.  Many bake and sell bread in their homes, hence bread house. The bread was so delicious that I took several wheel-shaped loaves home.  Perhaps because I love bread, but also because it was my small way of supporting the economy in this poor village. Three months later, I’m still eating bread.

From the time we arrived at the orphanage, I felt like I was steeped into a magical experience.  Nineteen kids greeted my small group with bear hugs and kisses. Wow! What a sweet and pleasant surprise.  They were so happy to see us, and made sure we knew it.  From that moment until we left the orphanage hours later, my heart was cracked wide open. Had I returned to San Francisco after that day, I would have felt fulfilled.  But there was more to come.  It was the start of an affair to remember.
On one hand, being with the kids was joyful. But on the other hand, it was sad. For most of these children, being at this orphanage was a place filled with more love than they have ever known.  Most of them had lived on the streets since they were barely able to walk. Their ages ranged from 3 to 19-years old, yet you could see in their little faces that they were old beyond their years.  Drugs, alcohol, and the streets were all some of them knew.  It was sad to hear their stories, and for the most part, we couldn’t discuss it with them. The memories were too fresh and painful.
I, more than anyone in my group, understood their plight. While not an orphan, my childhood was lost to drugs, alcohol, and a sordid lifestyle.  I lived homeless on the streets of New York at 18 surviving in whatever way I could.  I know all too well what one must do to survive.  Yet, I was granted a reprieve, an opportunity to turn the tide. There were angels in my midst.  So for me, this trip was not just a trip to Peru, but one more opportunity for me to say thank you and give back. And as in my life, there was an angel for these kids, and his name was Alcides.
A police chief for 30-years, he got tired of seeing these street kids come through his station. So he saved and saved and vowed when he retired from the police force, he would buy land and build a place where these kids could come live, grow, get an education, and become productive members of society.  A place where they could feel safe and loved.  Alcides has obviously succeeded, as evidence by the fact that while the kids are free to leave at any time, not one has chosen to do so.  How lucky they are and how blessed I was to get to speak with Alcides. 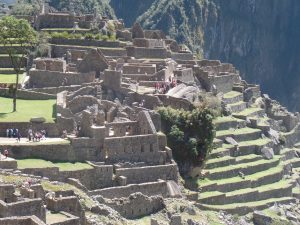 The next day we were off to the Sacred Valley, and then Machu Picchu. What I can say most about the Sacred Valley and then Machu Picchu is how awestruck I was with what the Incas accomplished. We often like to think we are superior to other people and cultures. Yet, when one is able to witness firsthand what these courageous people created, we think twice about our assumption that we are better than most. Like the Romans, the Incas built structures that are still standing.
The most exhilarating part of the Machu Picchu day trip was that I became willing to do something I was afraid to do.  In anticipation of a bumpy upward climb, I gave myself permission not to go to the top. Once there, I allowed myself to take one baby step at a time, and before I knew it, I was on top. Being atop Machu Picchu was wonderful, but being willing to get there was awesome!
Someone asked, what was my favorite part of the trip? My answer was – the entire trip!  From the first day at the orphanage with the kids, to interviewing Alcides, to interviewing two of the children (Alfredo and Dante), to visiting a bread house, to visiting the Sacred Valley, to climbing Machu Picchu, every step of the way was a piece of the puzzle that made for a beautiful picture.  The final piece, bringing the puzzle all together, was the group itself.  I went to Peru, primarily, to support a friend’s charity (Legacies in Motion), engage in humanitarian work, and visit one of the NEW 7 wonders of the world. What I got was so much more. Yes, the actual act of climbing Machu Picchu was awe inspiring, but what impacted me was the fact that I was even willing to go.

A Life Filled With Endless Possibilities.

Today my life is filled with endless possibilities, and I am grateful to be alive and fully present enough to participate in this, my journey.  There was a time when I sat on the sidelines judging those who showed up for life.  People who, even if afraid, had the courage to take risks, go for their dreams, and possibly fail.  I was always afraid to fail, so I made safe choices.  Making safe choices keeps you protected and out of harm’s way, but also keeps you and your life small.
After 37 years of trying new things, I take a stand for those who are courageous enough to show up for their lives, try new things, meet new people, and live a life of limitless expansion. Life is so short; don’t waste it. Before you now it, it’s over.
Here’s to you!   Feel free to subscribe to my newsletter