Do you have a Will? A Trust? If not, you may find your valuable assets going to the wrong person after you die.  Some folks think this is the case with the Jimi Hendrix estate battle.

For those too young to remember or not interested in music history, Jim Hendrix was a famous rock guitarist in the late 1960s. Perhaps, he was the most gifted guitarist of his time.
He became very wealthy AFTER his death in 1970.  His brother Leon, who Hendrix was said to be close to, will never see a penny of the $80-million dollars left by the Jimi Hendrix estate. Why not? Because Jimi did not think to prepare a will. Maybe it was the drugs, the booze, the blondes, the bright lights, or the incompetent management. Whatever the reason Hendrix did not have a will, the fact remains he died without implementing an estate plan.  Consequently, he left the decision, regarding the administration of his vast estate, to the courts.
Because there was no will, his assets and all proceeds therefrom went to his father, Al.  When Al died in 2002, instead of leaving his wealth to his son Leon, he left everything to his adopted daughter, Janie, from a second marriage. There was a lawsuit which lasted for years, and in the end, Leon got $0. Who knows whether Jimi Hendrix would have left anything to his brother?  Who knows the reason Al Hendrix removed his son Leon as a beneficiary of his will.  The argument Janie made in court was that Leon’s drug addiction, unwillingness to work, and overall irresponsible behavior was the reason.  Regardless of the legal outcome, had Jimi Hendrix left a will, this very costly and protracted litigation could have been avoided.

You may think this has nothing to do with you, since you are not Jimi Hendrix the famous rock star.  You would be wrong. The idea behind estate documents is that you control what happens to YOUR assets and other property. YOU decide, not the courts.
At a minimum, YOUR Estate Plan should include the following important and essential documents:

If you are interested in discussing YOUR Estate Plan, feel free to contact me Attorney Francine Ward. If you just want to join the conversation, feel free to check out my legal Facebook Fan Page, my Twitter page, or one of my LinkedIn Groups. 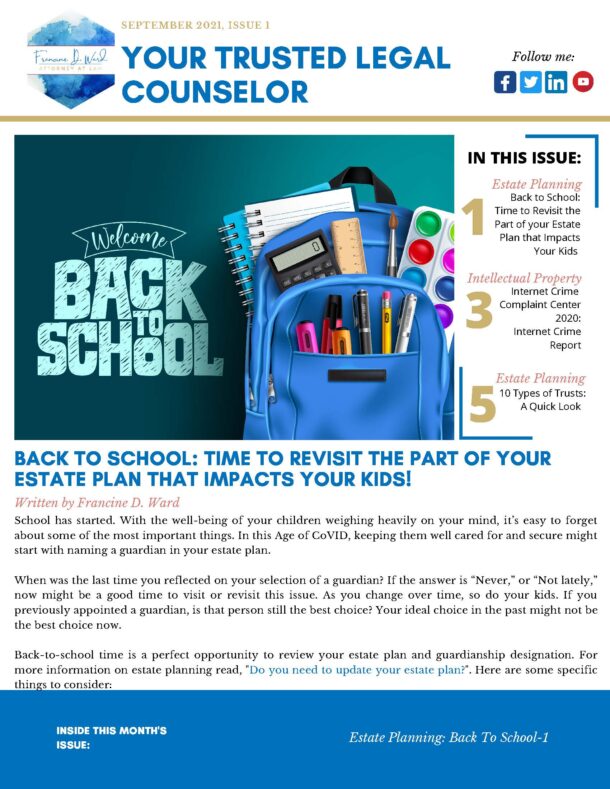